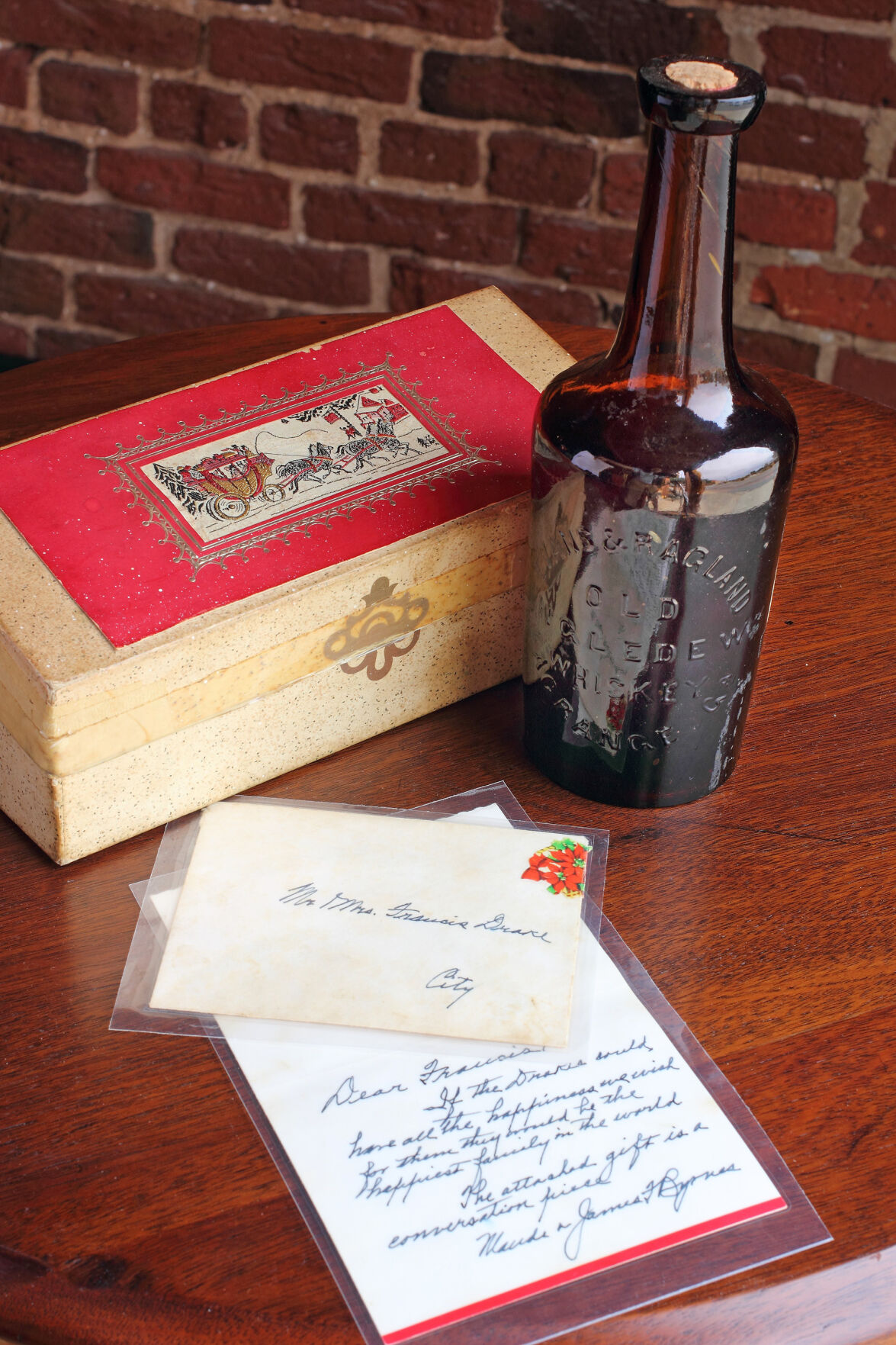 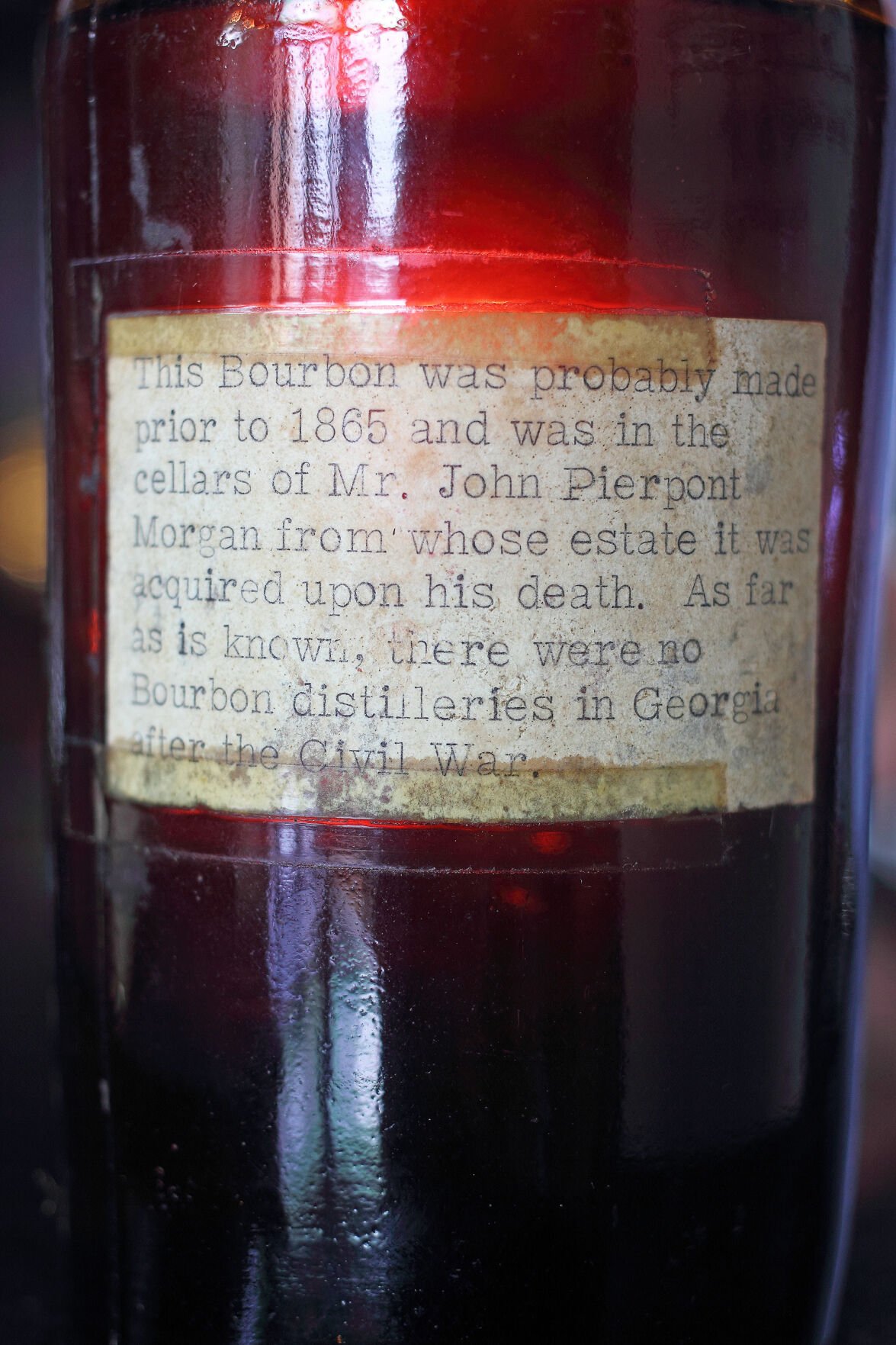 The whiskey was distilled prior to the Civil War and was owned by J.P. Morgan. (Ted B. Williams/Courtesy Rex Woolbright/TNS) 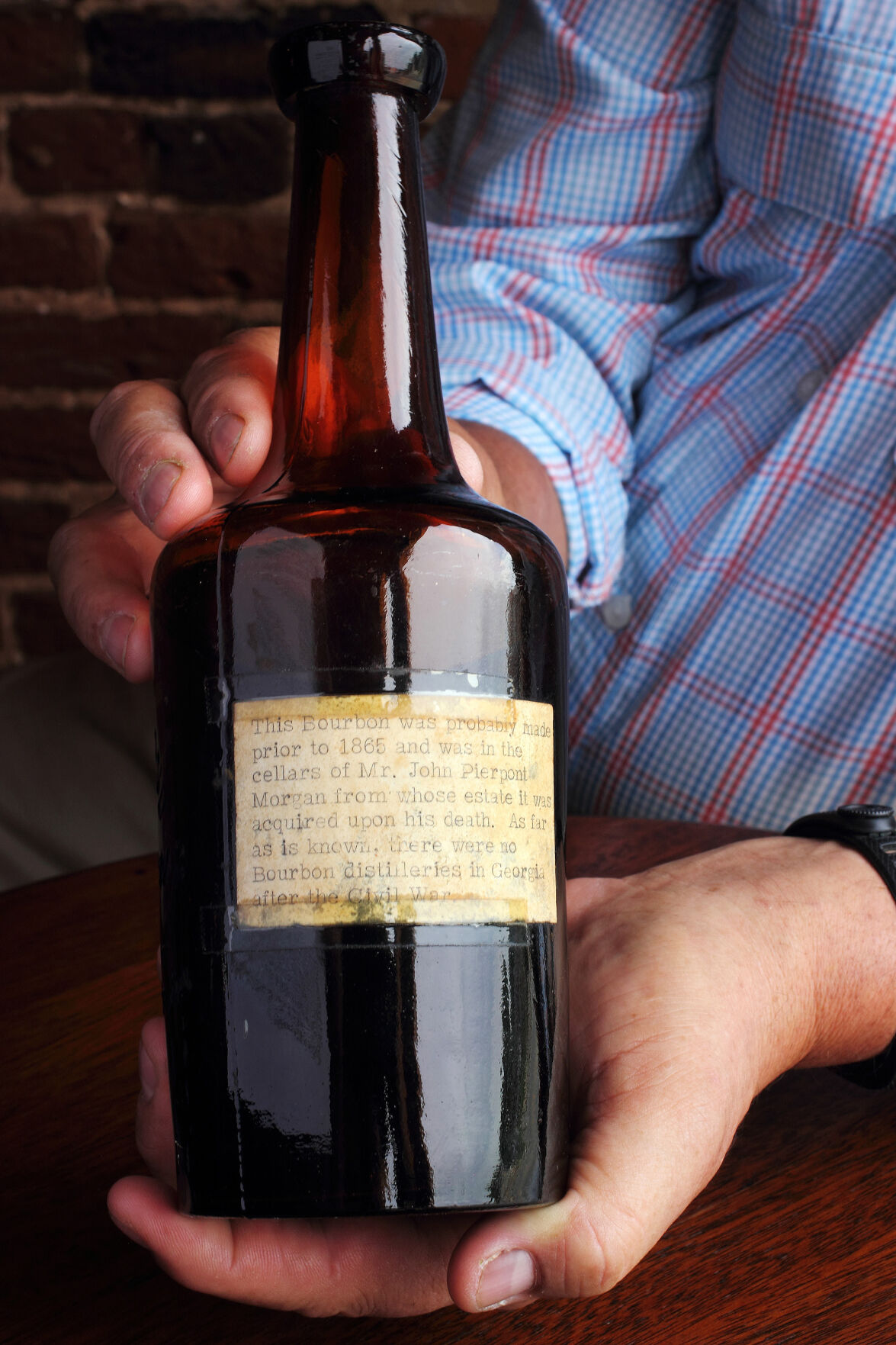 The world's oldest surviving bottle of whiskey was found with a note that called the bottle a "conversation piece." (Ted B. Williams/Courtesy Rex Woolbright/TNS) 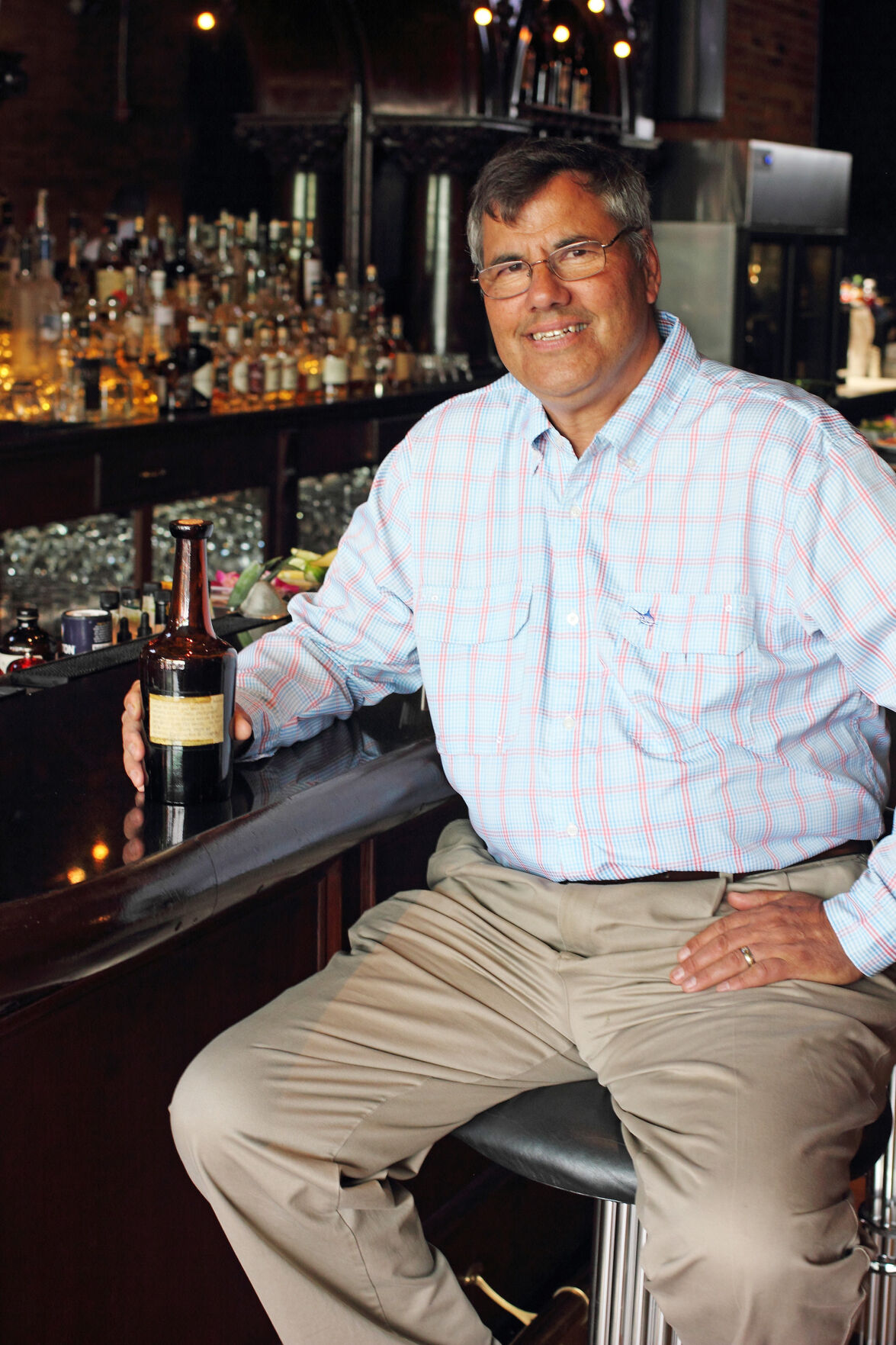 NEWBERRY, S.C. — Rex Woolbright was sorting through his late uncle Logan Drake's estate in Newberry when he came across an old-looking, still-corked bottle of whiskey.

"It was a bottle, and that was it," recalled Woolbright.

He couldn't have been more wrong.

That bottle of whiskey is estimated to have been produced between 1763-1803, making it the oldest known surviving whiskey in the world, according to Skinner Inc., the American auction house that recently sold the bottle for a whopping $137,500.

The buyer is the Morgan Library and Museum located in Manhattan. The museum began as the personal library and collection of John Pierpont Morgan — better known as J.P. Morgan, the 19th century banking magnate — as early as 1890, when Morgan began assembling a collection of manuscripts, books, drawings and prints, according to the museum's website.

As it turned out, Woolbright's uncle's bottle of whiskey has a long and rich history that traces back to Morgan himself and has wowed the man who discovered it.

Just how old is the world's oldest whiskey?

Realizing that he may have more on his hands than just an old bottle of booze, Woolbright reached out to professionals.

"It was like a mystery novel," Woolbright said. He had to "follow all of the clues" in order to find out where the bottle was from.

One of those professionals was Joe Hyman, a fine spirits specialist at the Skinner auction house.

Coming across old and rare spirits is common in Hyman's line of work, he said. But "this one," he said, "was unique."

(In Woolbright's retelling, he said he naively suggested uncorking the bottle, which prompted a wave of shock and earnest protest from the specialists.)

The carbon dating showed strong evidence that the whiskey was produced between 1763-1803, which would make it the oldest known surviving bottle of whiskey in existence.

Where did the world's oldest whiskey come from?

Raised lettering imprinted on the bottle reads: "Evans & Ragland Old Ingledew Whiskey, LaGrange, Georgia." That was Woolbright's first clue about the bottle's history. The second was a gift note to the Drakes — Woolbright's uncle's family — that came packaged with the bottle, which called it a "conversation piece."

Hyman speculated that the whiskey could have been distilled in Baltimore and then transported to Georgia, given that there were strong trade connections between the two locations at the time. However this is only speculation, and experts are unable to determine where exactly the whiskey came from.

Additional research showed the bottle Woolbright found was one of three identical bottles purchased by J.P. Morgan during his time in Georgia. The legendary banker owned property in the state and visited frequently. Morgan's liquor collection, including these bottles, was passed to his son, J.P. "Jack" Morgan Jr., following the elder Morgan's death in 1913, according to Garden & Gun.

Jack Morgan gave these bottles away in the early 1940s, according to Garden & Gun: One was gifted to Franklin D. Roosevelt, one to Harry S. Truman and one to James Byrnes, a former governor of South Carolina, congressman and a U.S. Supreme Court justice.

Woolbright told Garden & Gun the Byrneses were neighbors with the Drakes, Woolbright's uncle's family. So it made sense to him that the bottle of whiskey would end up in their possession.

The bottle remained in the family's possession until Logan Drake's passing in 2008, when it was then found by Rex Woolbright. Woolbright had set his uncle's possessions asisde for years before more recently discovering the bottle .

Where will the world's oldest whiskey go next?

The world's oldest surviving bottle of whiskey was sold at an online auction that closed June 30. The Morgan Library and Museum in New York City bid a winning $137,500, according to Skinner, the auction house that handled the research, testing and selling of the bottle.

Included with the bottle will be a handcrafted case made by Woolbright's friend and neighbor in Newberry, Ron Jones.

"The color for the inside of the box is purple for royalty," Jones said. He chose the color to convey the importance and richness of the whiskey's history, he said.

Woolbright didn't ask him to make the case. Rather, it was something Jones wanted to do for his friend, he said. Jones described Woolbright as "genuine" and "probably the most authentic person (he has) met."

"When I showed (Woolbright) the box, he just had the biggest smile on his face, and he said 'Ron, that's beautiful,'" Jones recounted.

As for Woolbright, he is happy the whiskey and its new case will be put on display.

With our weekly newsletter packed with the latest in everything food.

Related to this story

Recipe of the Day: Summertime Meatloaf

When you think about what to serve for dinner during summer you probably consider pasta salad, ceviche and other cold dishes. But classics like meatloaf are not to be overlooked.

The Kitchn: These are the best shortcut cinnamon rolls you’ll ever make

These gooey, tender cinnamon rolls are everything you love about the classic brunch treat — down to the blanket of cream cheese icing — but they’re ready in a fraction of the time.

Recipe of the Day: Zucchini Boats

This kid-friendly recipe is healthy and hearty, and it will taste even better in the summer thanks to the super fresh vegetables used.

Key lime pie is one of those foods that always tastes better when you’re on vacation, but the cravings for this particular treat often subsist long after you’ve gone back home again.

Our team of experts has selected the best Hamilton Beach slow cookers out of dozens of options. Don't buy a slow cooker before reading these reviews.

Recipe of the Day: Teriyaki Beef and Asparagus Skewers

Thanks to the steak and asparagus, these skewers feel like an elegant Japanese-inspired appetizer, but they realistically only take 20 minutes to put together.

The Kitchn: This cheesy spinach frittata will never let you down

Whether you’re looking for an easy, crowd-pleasing brunch dish or a weeknight dinner that doesn’t require a trip to the store, a frittata is always the answer.

Seriously Simple: Grilled peach salad is a taste of summer

This is a summer salad that you can put your own signature on. To drink? How about a chilled glass of California rose or chardonnay?

Our team of experts has selected the best air-fryer toaster-oven combo out of dozens of options. Don't buy a combo toaster oven before reading these reviews.

The whiskey was distilled prior to the Civil War and was owned by J.P. Morgan. (Ted B. Williams/Courtesy Rex Woolbright/TNS)

The world's oldest surviving bottle of whiskey was found with a note that called the bottle a "conversation piece." (Ted B. Williams/Courtesy Rex Woolbright/TNS)

Get up-to-the-minute news sent straight to your device.